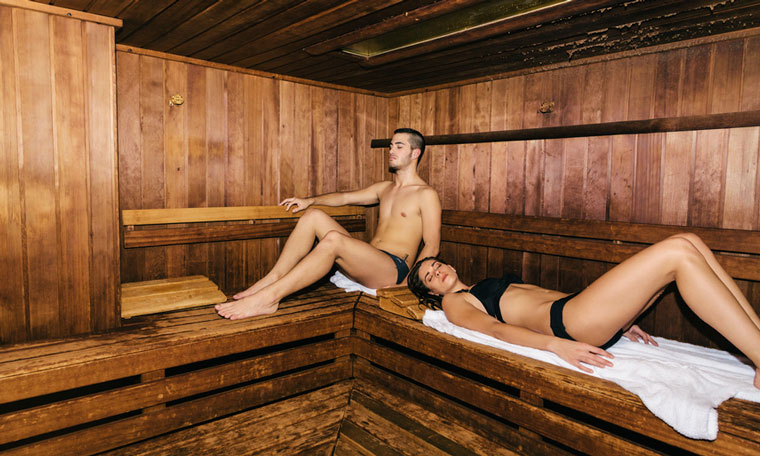 How I Learned To Relax and Love The Jimjilbang

Recently I was at a vegan restaurant in Los Angeles waiting for my sprouted hummus flatbread and eavesdropping on the table next to me. The guy seated there was in his early twenties, deeply tanned, and completely barefoot, with dreadlocks twisting down his back. “It’s just really hard for me to do nothing,” he said, sipping tea. “I just feel too guilty.”

I hear slivers of conversations every day, but this one stuck with me. If this guy, who I’m pretty sure tried to sell me a bong on Venice Beach, has trouble relaxing, then is there any hope for any of us in this stressed out, go-go-go world? Was there hope for me?

There is. It’s called the jjimjilbang.

The jjimjilbang is the co-ed lounge room at a Korean spa. This isn’t the bacchanalia is sounds like—there are separate sauna areas for men and women, so spa-goers only disrobe, steam up, and scrub down with members of their own gender. But after all the waterworks comes (in my opinion), the best part—the chillest zone of all; the jjimjilbang. The word roughly translates to “heating house,” and usually has a heated floor that’s dotted with pillows and mats, a few TVs hanging on the wall, and a nearby snack bar. But what attracted me the most to the jjimjilbang wasn’t in any of its physical attributes, but in its function: it’s a designated space for doing nothing, together.

A public spa has this peculiar double-sided effect—it’s a place to take care of yourself and a place to get over yourself. Dozens of other naked bodies in the saunas reminds you that yours is no big deal. There are boobs and butts of every shape and size, scars, stretch marks and tattoos. The imperfections you thought were unique to you—well, they aren’t. Not here, anyway.

The jjimjilbang offers a similar dose of reality when it comes to relaxation. It’s easy to associate leisure with expense. The more relaxing you do, the more it’s going to cost you. Your “life-changing” trip to Hawaii or a weekend hike at Canyon Ranch is going to set you back a bit financially. It’s also going to cost you in the social, Snapchatty sense—turn off, and you’ll miss out. You could fall so far behind that catching up doesn’t make relaxing worth it. Work emails pile up, dirty dishes pile up, and your 6:30am spin class will charge you if you don’t show up. It can feel like you can’t afford to relax.

Except, in the jjimjilbang, you can. Price-wise, it’s cheap, around $30 for general admission (special treatments like scrubs are extra). It’s a safe zone emotionally too. As soon as any guilt or productivity-FOMO starts to creep in, you can just look around you at everyone snoozing, reading, watching or talking, and be reminded that taking a few hours to just chill out isn’t going to kill you. The jjimjilbang is also the spot where you can hit up the dry saunas. The specific assortment varies from spa to spa, but there are jade saunas, salt saunas, saunas full of tiny clay beads (think ball pit for adults), and the bulgama, the super hot dome that usually cooks at over 200 degrees. But in all of them you can sweat it out while—most importantly—still lying prostrate on the floor.

I took my boyfriend to a Korean spa for the first time on Valentine’s Day. We ended up staying for nine hours. We read the paper, and watched Korean dramas with no sound and no subtitles (so no one could understand, I guess). We dozed, ate lunch, dozed again, and got up for shaved ice. We talked a little, but most of the time we just laid there in silence, basking in the glory of communally doing nothing. Halfway through our afternoon of sloth, he sat up, and through the holes of the sheet mask on his face said “Baby, I think this is the best place on earth.” I nodding in agreement, because speaking out loud required too much effort.

The K-spa has since become a Valentine’s Day tradition; we make it an all-day affair when we can manage it. We camp out on the heated floor like lizards on a rock and drowsily fade in and out, knowing that if there’s still sunlight streaming through the windows, then we can at least stay for a few more hours.

I find myself craving another trip whenever I feel like I need to turn my brain and body off. Anytime I need to spend time recovering from a stressful week, get over a cold, or fight off jet lag, I robe on up. Sure, I could lay on the couch with the Sunday Styles section, but I’ll make it thirty minutes max before I decide that I should really get up and fold the laundry. At the jjimjilbang, I can drowsily daydream an afternoon away and know that no matter how long I stay, my to-do list will still be there when I leave, and it probably won’t have even noticed I was gone.