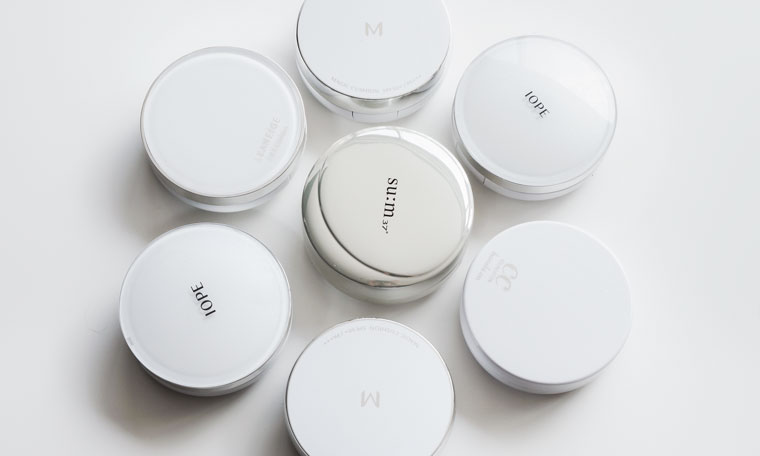 Cushion Compacts Made Me Love Foundation

A few years ago, my best friend texted me, “Should I start wearing foundation?” “Oh my god, no!” I wrote back immediately, “We’re not THAT old!”

In my mind, foundation was a spackle you caked on to fill in wrinkles and cover age spots, something you started wearing when you became eligible for a senior citizen discount at the movies. Clearly, I’d had a few bad experiences in the past.

I’d experimented with foundation as a teenager, in the days when all my beauty products came from the drugstore. I’d buy the occasional bottle from Maybelline or Revlon, along with those tiny, triangle-shaped sponges that my teen magazines told me were “a must.” I was disappointed every time. Shrink-wrapped caps meant there was no way to test out the color, so it was hard to pick a shade that really suited my skin tone, and no amount of blending seemed to actually blend anything. I still had the telltale orange line demarcating my face from my neck. When you’re sixteen making $4.15 an hour working the concession stand at a neighborhood pool, spending $7 to try a new foundation was a losing proposition. It wasn’t long before I gave up completely.

More than ten years later, I decided to give it another go. Surely, I told myself as I ventured into Sephora, there must’v been all sorts of technological advances in foundation since my teenage years. A half hour and $100 later, I walked out with a complete set of mineral makeup, and a lengthy lesson in “tap-tap-swirl” application. The foundation was definitely (finally) my shade, and I loved the way it smoothed out the surface of my skin. Gone were redness and pigmentation, and even on days when I was tired or stressed out, I’d tap-tap-swirl and be amazed at how well-rested I suddenly looked.

But I hated the feeling of it on my skin. It felt like a layer of dust had settled on my face—which was pretty much exactly what had happened—and by the end of the day, I’d find myself making weird facial expressions to loosen what felt like a mask. Plus, the mineral powders had a way of migrating to settle into your fine lines, drawing attention to them in a way that absolutely no one wants. Into the bin it went. This time I knew for sure foundation and I weren’t meant to get along.

That is, until I met the cushion compact. I was skeptical at first, assuming that, like everything else, it would give me a chalky feel and a look that screamed, “I’m wearing makeup!” It did neither. It felt good, it looked good, and it had SPF. After a week of daily use, I was converted. I made my best friend—the same person I’d once chastised—buy one, and started a campaign on my sister.

The first one I tried was the Iope Air Cushion Compact, a Korean classic. I once saw a Korean girl pull an Iope compact out of her bag in downtown Los Angeles, and I had to stop myself from running up to her to tell her that I used one too. It felt like the secret symbol of the good skin club.

Unlike previous foundations I’d tried, the cushion’s formula felt like you were wearing nothing at all. The application’s different too—you take a thin, non-absorbent puff and press it into a makeup-soaked sponge. Then you tap it gently on your skin until you get the level of coverage you want. The result is a no-makeup look that’s glowy and smooth, the kind that gets you the skin compliments you live for.

Shortly after I started using it, I became someone I never thought I’d be: a girl who carries foundation in her purse. Since I’m fair, prone to sunburn, and live under the California sun, my dermatologist cautioned me not only to wear sunscreen, but to reapply throughout the day. My SPF 50 cushion compact proved the ideal way to do that. I didn’t have to tote a bottle of goop in my bag or wait until I was someplace where I could wash my hands. I could now reapply my SPF while participating in the official past time of Los Angeles: sitting in traffic.

So if you happen to see me sitting at a stoplight, dabbing my nose with a white compact and little blue puff, give me a nod. Makeup game recognize makeup game, and us good skin club members have got to stick together.