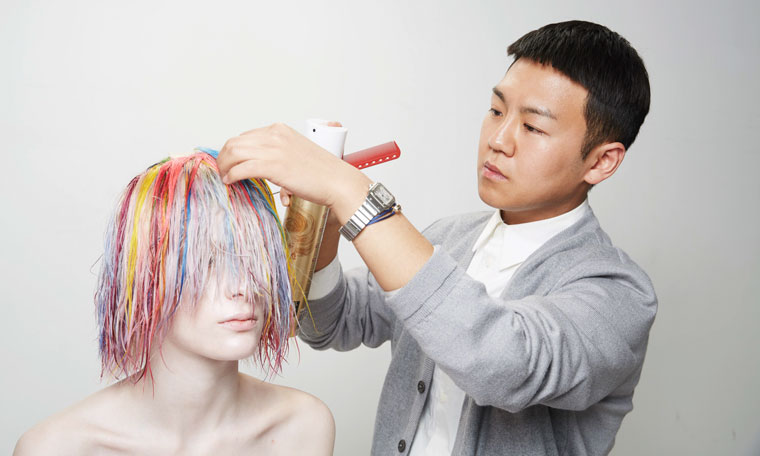 Korean stylist Sunwoo Kim has reached that tipping point where he’s not quite sure if he’s famous or not (but if you have to ask the question, the answer’s probably yes). He rose quickly in Korea’s industry ranks thanks to his association with model and Instagram queen Irene Kim (no relation); the two were friends, then stylist-and-client, and now fellow celebs in their own right. He didn’t go to hair school, opting instead to apprentice in Seoul salons for five years (an alternative way to earn one’s styling credentials in Korea). One of Sunwoo’s specialties is the almost bioluminescent “rainbow hair” he first debuted on Kim. Manic Panic and pastel hues have been trending for a while in Korea and the States alike, but what Sunwoo does goes way beyond dip dye—he uses balayage techniques to layer colors that shift and meld with liquid ease. We caught up with Sunwoo at his multi-story salon Soonsoo in Seoul’s ritzy Cheongdam district to check on the current rainbow craze and to see what other trends were on his horizon. Here’s what we found out.

Balayage is here to stay.
“Before it was all about all-over platinum from roots to ends. But now people want highlights and lowlights—they want that look of texture and depth you get with multiple colors,” says Sunwoo. Plus there’s no need to book root touch-ups every three weeks. Sunwoo’s creations have this convenience built right in. “If a client with dark hair wants to dye it really light, I always put lowlights at the roots.”

Rainbow hair has to be done right.
Last year, Sunwoo was written up on Vogue.com and was quickly flooded with tourists eager to get the rainbow look. Since then, the trend has gone way beyond cloning Irene’s look; clients want a unique take. “In the past, clients came in with photos of celebrity looks they wanted me to replicate. But now they just ask me for my opinion and let me do whatever I want. They want a more customized look.”

Think you can take a crack at it yourself? You wouldn’t be the first. “Irene actually used to dye her hair herself. She found a shop that sold pink dye and just went for it. Then we started experimenting with it together, adding more colors, and that led to rainbow hair.” Sounds easy, but he cautions against trying this at home. “If you want violet or blue, you have to bleach first,” he says, and it’s easy to do damage with DIY. Plus, you need a seasoned eye to be able to see hair’s future, not just its present. “After about three weeks, even deep, dark, vivid colors will lighten up and fade to pastel. The trick is to choose colors that will actually look better as they fade a little.” Which is where the whole artistry thing comes in.

American women have extra work to do.
Americans have a more organic source of damage to contend with. “I can tell when my clients have come from the US based on the dryness of their hair, especially if they come from Los Angeles. I touch their hair and can tell immediately,” he says. He has a novel explanation for this. “In Korea, the sun is not as strong. In the US, I think, the sun is stronger.” We’re taking his word for it. If your own hair happens to be at the mercy of the US sun, he recommends Davines Ol Oil. “It’s very light.”

The next big thing: baby hairs.
Hear the man out. “Short, curly baby hairs sticking out from your hairline—I like it. I think it’s cute.” If you have long baby hairs at your temples, fluff them up, curl them in spirals, and wear them proudly. If you’re lacking in that department, you can get a few hairs cut and permed to look like the real thing. Apparently, it’s really happening. “A client came into the salon asking for this baby hair look, and I gave her the cut. Tomorrow she’ll be coming in to get the perm,” says Sunwoo. “I did this a few years on a few people and they really liked it. It makes you look younger. Its perfect for covering up a receding hair line.” The look has been pictured in a few ads, but has yet to fully take off. Sunwoo leaned in and confided, “I’m worried that only I think it’s cute.”

If it sounds weird, well, that’s because it is a little. But so is every trend in its, um, infancy. “When Irene first did rainbow hair, people didn’t like it. Then they got used to it, and now everyone wants it. A person with style can pull off a strange or unique trend, and can make other people want it. It doesn’t matter if you’re in Korea or the US—this is universal.”

Set your Google alert now. Sunwoo says he’s planning on working in NYC next year, and will eventually move on to LA. In other words, yes, he could be coming to a salon near you (nearer than Seoul, anyway).