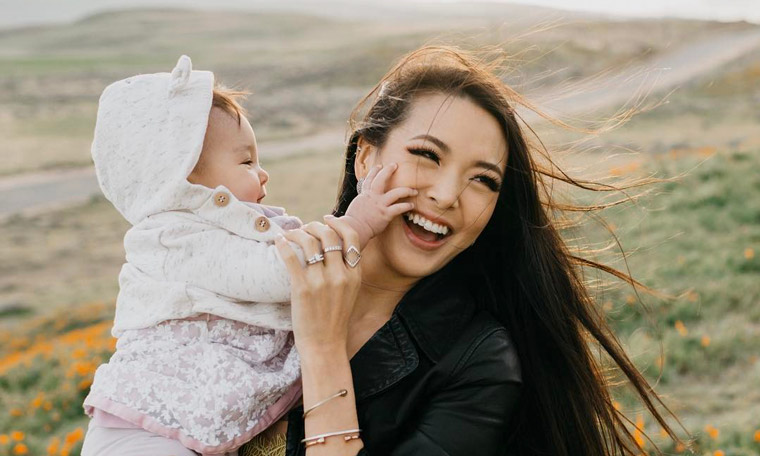 Welcome to Mother’s Day Week at The Klog! In honor of the hardest-working women on the planet, we’re publishing a collection of articles and videos devoted to moms-to-be, new moms, and the moms we’ve been relying on for years. Today, we chat with Jen from Head to Toe about being a new mom and what her skin care routine is.

You may know Jen Chae as From Head to Toe, the beauty blogger who has over one million subscribers to her YouTube channel. And while she may always ok like perfection in her videos on how to curl hair with a flat iron and how to create “Instagram brows,” Jen just had an adorable baby girl named Aria (who also has her own super cute Instagram account), which means that things got real fast when it came to her beauty routine during pregnancy and after.
Here, she shares all of her wisdom when it comes to treating your skin during pregnancy and what to prioritize in your routine after your bundle of joy arrives.

How was your skin when you were pregnant?
The main things that I dealt with during pregnancy were a lot of acne problems. I had it in areas I would consider hormonal acne areas—so lower chin, jawline—and then I also had quite a lot of body acne on my back and even on my stomach, and that was something I had never really heard of anybody dealing with. It was pretty severe on my back, actually.
How did you change your acne treatment when you were pregnant?
I tried to be really, really careful with everything I used for my skin and my body, because I wanted to be aware of what ingredients were in the products I was using so that nothing harmful would go to the baby. That means I couldn’t use any of my retinoids and acids and anything that helps correct the acne—like salicylic acid and benzoyl peroxide—I sort of avoided all of that altogether. I really simplified my skin care routine just because I felt like in the long term it was more important to keep what I was using healthy and basic rather than have a really extravagant routine.

Did you ever consult with a doctor and ask them how to handle your acne during pregnancy?
The acne on my back was so severe that I actually went to see a dermatologist about it. Her answer was that she could provide me an antibiotic, but that was extremely expensive because my insurance wouldn’t cover it. The whole answer was basically, well it’s temporary so it’s going to go away. But that doesn’t mean that I didn’t suffer greatly for it!
Did you do anything to treat it? Or did you just kind of leave it alone?
Well, I would mix coconut oil with tea tree oil and I’d have my husband massage that into my back about every night.
And how has your skin been after having Aria?
After I had her my skin became really dry and that might partially be because I’d been breastfeeding so a lot of my resources were going towards making breast milk. So I dealt with a lot of dry skin issues that I’d never really dealt with in the past ever.
But now, I feel like things are a lot more normalized. One good thing is that I didn’t have any acne basically for the first seven months of post pregnancy. My skin’s been really really clear, and I know it’s a little bit TMI, but I started to have acne again when my period came back. It’s very hormonally related with me.

How do you carve out time for a skin care routine now that you’re a new mom?
For me, I’m pretty dedicated to my skin care, so I try to keep up at least a very basic skin care routine even when things get crazy. So after I had Aria, even if my routine was literally just like wash my face, moisturize, and eye cream, that was my five minutes that I needed to take care of my face so I made sure to do that.
I think mothers can relate to that. My sister has two kids and she’s like, “I can’t even have five minutes to shower!”
I think a lot of people who have a newborn feel like they can’t take time away for themselves. We tell ourselves that we can’t even get up to go and pee. But the fact is that it’s really important to make taking care of yourself a priority. It’s almost like you have to schedule it.
Even if it just means asking someone to watch the baby for five minutes while you just wash your face. It just makes you feel so much more human. In those early days, I really do think it’s important to tell yourself that you still deserve that. Because a lot of people don’t. They feel like they’re not being a good mom if they’re not holding the baby 24/7.
What kind of sacrifices did you make in your routine when you had Aria?
I just removed a lot of the in-between steps of my routine completely, but I would always still use a face wash and moisturizer. I personally feel like just using a face wipe is not enough for me; it just doesn’t completely clean my skin and I am very acne-prone so if I do that for a couple days in a row I will still break out.
And then when my skin was very dry in the beginning, I tried to add a couple more steps to keep the hydration in. So usually that means some kind of hydrating serum and topping everything off with my moisturizer plus a skin oil, just so I could add more layers to seal it in because I think that my moisture barrier was really messed up for a while.
Are there any specific products that helped your dry skin?
I started regularly using my SK-II essence twice a day, every single day. Ever since I was watching those videos about the 7-layer Korean routine with the essences, I found that even if I do like two layers and just pat it in or even if I just do one layer and spend the extra time patting it in until it gets to that sticky phase, I feel like that has really helped a lot with just making sure that the moisture gets absorbed into my skin. I also added in a vitamin C serum—the Drunk Elephant C‑Firma Day Serum—and that really helped with my pigmentation I had during pregnancy.

Did you do anything about stretch marks?
With stretch marks, it’s really more about genetics than anything else. If you get stretch marks, I think it’s really important to not be hard on yourself about it or feel like you didn’t do enough because you really can’t help it. I did get some stretch marks at the end of my pregnancy, but when my skin sort of went back to what it was before, after everything shrunk back down, you can’t really see them at all.
That’s comforting. I totally agree with you that genetics are involved, but it doesn’t hurt to moisturize that area.
I will say that when the stomach is really huge and when it’s stretching out, it can get quite dry and itchy. Regardless of whether you’re worried about stretch marks or not, you should moisturize your stomach every single day. It’s always important to keep a positive attitude about the function of what your body is doing over fear of permanent changes. Because your body is doing something really incredible, and it just means you’re joining this army of women who have gone through the same thing before.
There’s like that instant bond, right, when you meet other pregnant women?
Yeah and that’s something I didn’t realize until after I had the baby. I was told that you’re joining this crowd of people who have done something really mind-blowingly incredible but I didn’t fully grasp that until I went through it myself and saw just how insane it is. If everyone were honest about what actually happens people would be a lot less embarrassed to be perfect after they have a child.
What’s the one tip you’d give new moms about changing either their beauty routine after having a kid?
Maybe this is something that is not said enough, but I think it’s important to remind yourself that you deserve that little bit of time for yourself. Instead of staying in a robe all day, putting on real clothes actually does make a difference and spending five minutes on makeup, even if that’s just a tinted moisturizer with some brow pencil, that does make a difference.
There are ways you can even shortcut it. One thing that I did before my due date is get lash extensions because I knew that I wouldn’t be wearing a lot of makeup. So for the first month after I had the baby, I felt a little bit less crazy because my lashes looked really nice and I didn’t have to wear makeup. That’s something that I would definitely do again!
At the end of the day, how you look becomes much less important when you’re taking care of something you created from your body. It is a really amazing, beautiful thing, regardless of how your hair is or how much makeup you’re wearing. As long as we just keep forgiving ourselves and realizing that it’s this ongoing journey. And even if you had crazy long hair like I did, you can always get a “mom cut”, and that’s OK.

+ What do you think of Jen from Head to Toe’s routine? Let us know in the comments! 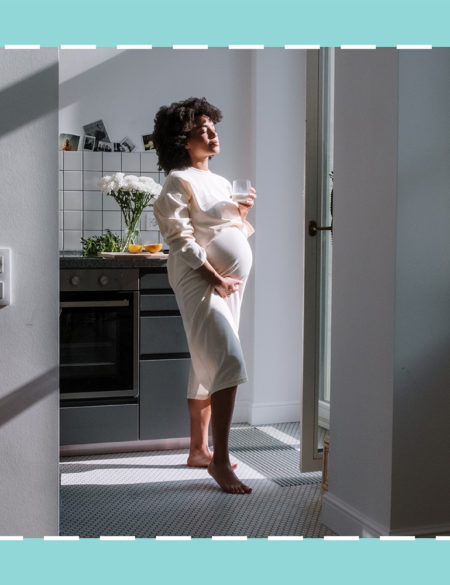 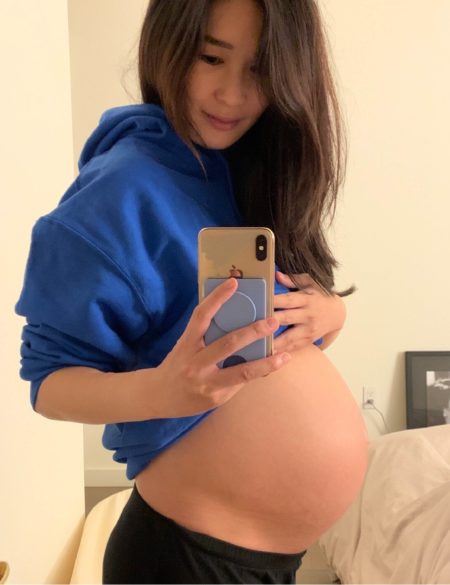